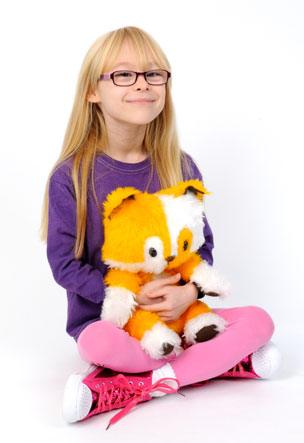 ...I'm delighted that we can announce such a strong line-up of new and established female talent and characters."Kay Benbow, Controller, CBeebies

Kay Benbow, Controller of CBeebies, is delighted to announce a raft of new commissions for the channel. The diverse mix of new and returning shows will encourage the CBeebies audience to have fun with music; explore their environment, and celebrate some of the big annual events in our calendar as well as introducing several new female faces to the channel.

Melody is an original and inspiring show, produced with support from the RNIB, that will introduce the CBeebies audience to a rich variety of classical music, while Minibeast Adventure - With Jess is a new factual entertainment series, exploring the astonishing wildlife that lives on our doorstep. Woolly And Tig will be back later in the year with a series of specials, while the summer sees Lauren Laverne provide the voiceover for new online brand, Tee And Mo.

A co-commission with BBC Learning, Melody (20x7-minute) is a mixed-media show designed to introduce pre-school children to a wonderful variety of classical music through stories and delightful, colourful animation. Melody is a partially sighted girl with an incredible imagination. In each episode she discovers a piece of classical music and, as she does so, she visualizes wonderful stories and characters conjured up by the mood of the music - everything from trumpeting elephants to lonely snowmen. As she hears the story and the music together, the audience joins her on a fantastic journey from real life into the amazing, animated images dancing in her mind.

Created by Luke Howard, the series is produced by Wish Films and LAAH Entertainment with support from the RNIB. The executive producers are Michael Towner (CBeebies), Katy Jones (BBC Learning) and the series producer is Will Brenton (Wish Films/LAAH Entertainment). Melody will air on CBeebies later this year.

Minibeast Adventure – With Jess (20x9-minute) brings 20 amazing creatures into the living rooms of the CBeebies audience as zoologist Jess French encourages viewers to explore their local environment and get close to the minibeasts that live in the gardens, parks and windowboxes around them. In each episode, viewers visit Jess’s treehouse where she introduces them to her minibeast of the day. From there she sets out on a Minibeast Adventure with children to try and find that day’s animal or insect.

New presenter Jess French grew up with a passion for the natural world, as her father bred insects. Her zoological and veterinary studies have given her an in-depth understanding of the very smallest creatures which she is enthusiastic to share with the next generation. Minibeast Adventure – With Jess is produced by Kindle Entertainment for transmission on CBeebies in 2014. The executive producers are Michael Towner for CBeebies and Anne Brogan for Kindle.

Woolly and Tig (5x10-minute) is also back later this year with a series of special episodes as Tig heads off for some new adventures accompanied by her toy spider Woolly. The new episodes focus on festivals and special occasions that most children will encounter such as Halloween, Hogmanay and Harvest Festival and will help children explore their feelings when faced with new experiences.

Woolly And Tig is produced by tattiemoon and these new episodes will be shown on CBeebies later this year/early next year. The executive producers are Michael Towner (CBeebies) and Brian Jameson (tattiemoon).

And finally, new online brand Tee And Mo - a pre-school 2D-animated series of digital, interactive experiences for young children and their parents/caregivers to play together - launched its first two games in July. Tee And Mo comprises of 10 narrative-led desktop and mobile games accompanied by a series of one-minute shorts that will be rolled out across August to October on CBeebies.

Narrated by Lauren Laverne, Tee And Mo revolves around the daily adventures of an adorable and unstoppable baby monkey, Tee, and his first-time mum, Mo. The series aims to explore everyday situations through the point of view of the bond between young children and their parents/caregivers and how they both learn to be kids and parents by facing the challenges of daily life together. Tee And Mo was created by Dominic Minns (Plug-in Media) and the executive producers are Catherine McAllister (CBeebies) and Juliet Tzabar (Plug-in Media).

Kay Benbow, Controller of CBeebies, said: “I've made no secret of the fact I've been looking for more female leads on the channel, so I'm delighted that we can announce such a strong line-up of new and established female talent and characters.

“Melody is a charming new series which I hope will inspire a love of music in our young audience, in Minibeast Adventure, new presenter Jess French will demonstrate that there are many extraordinary and beautiful creatures living right on our doorstep. It's great to welcome the talents of Lauren Laverne to CBeebies in Tee And Mo and lovely to have Tig back in some longer episodes."

﻿CBeebies is dedicated to delighting and surprising its pre-school audience and it remains the UK's most watched and most loved channel for the under-sixes. Just under half of the target audience tune in every week (parents and carers with children aged 0-3 and four- to six-year-olds in digital homes) and our reach is over double that of our nearest competitor.

Our most popular shows include In The Night Garden, Something Special, Octonauts, Justin’s House, Mr Bloom’s Nursery and Tree Fu Tom, together with new shows Swashbuckle and Old Jack’s Boat.

The CBeebies website is hugely popular with our young audience and their parents and helps extend the ‘learning through play’ philosophy. This summer, we also launched our first app – Cbeebies Playtime.

Formed by Luke Haward in 2012 , laahentertainment  is a production company which aims to create new and exciting concepts, and produce them into successful television, film and literary properties.